My daughter and I came across Small Foot at Red Box last year.  We rented it, fell in love with it, and purchased a copy to add to our home library.  I’m thrilled to see places like Lakemont Park show it this past summer and most recently Coral Reef Park in Palmetto Bay, Florida. Why? 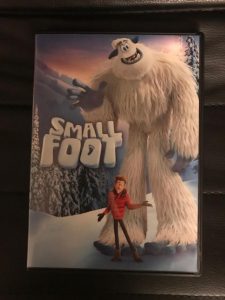 This story,  masterfully written by Mark Mason Robledo, provides fodder for so many issues that are impacting our society today.  Those topics include social media, news, leadership, friendship, and family with the overriding theme that bad attitudes and beliefs prevent us from growing, getting along, and finding satisfaction in our innate calling.

Then we are transported to the world of humans and meet another pair of friends. Percy and Brenda.  Percy feels so desperate in his attempts to make an impact through social media that he stoops to creating a sensational lie.  Ironically, he learns that yeti’s do exist.  In the process, Percy undergoes personal transformation from a fame seeking individual to a martyr to protect others.

Returning to the Yeti’s we encounter two fathers.  One, the leader,  the Stonekeeper,  who perpetuates cultural lies and the other who is a humble production of these lies.  The Stonekeeper does not maliciously enforce the wrong belief about the truth.  He believes it is the only way to protect his people. This revelation persuades Migo to join along in the propaganda.  But it doesn’t stop the Stonekeeper’s precious daughter, Meechee.  She is resolved to discover the truth and feels betrayed by Migo who chooses to align with her father’s deceitful leadership.

How often do leaders take advantage of  false beliefs to secure and maintain order?  I propose that is one reason why religion has such a bad reputation.  It it suppose to be the portal of truth when instead it often is the means to instill fear and maintain social order.   Do we also fall into this trap like Migo as parents, teachers, and friends?

Humans spook easily.  Our fears lead to many misconceptions.  One is  that we need to be in control of everything especially our children.   Isn’t that what Biblical passages like  I Timothy 3:4-5 are all about?  But a closer look at what Jesus taught might mean something entirely different.

First in John 8:32 Jesus affirms that knowing the truth brings about freedom not control.  Meechee’s drive for the truth is good.  But sometimes the truth hurts.  It can cut deeply.  In a culture that is committed to avoid pain and to amuse itself this creates quite a challenge.

The Stonekeeper persuaded Migo by revealing a horrendous reality in history.  The humans violently attacked the yetis years ago.  Reality is humans have been known to  mistreat, abuse, and kill others from different human groups all throughout various points of history.  Sometimes they behave in ignorance and lack of understanding of one another.  At other times they do it to defend themselves.  And unfortunately, there are a few who did it for selfish gain, power, and/or pleasure.  These are serious offenses that produces traumatic responses.

Dealing with trauma is not easy or pleasant.  It is wrought with agony, bed drenching tears, and grief.  Emotional experiences that no one wants to go through.  The longest book in the Bible, Job, illustrates this.  At first, Job’s friends served him well, but their capacity (seven days which greatly surpasses most) to sit quietly and mourn with their friend expired.  They broke out into reasoning and questioning as to who was to blame for such suffering for the next 35 chapters.  Blame is nothing new it started in the beginning.

In Genesis 3: 12-13 Adam blamed Eve who then blamed the serpent for their rebellion.  It’s continued throughout history.  Instead of confessing that we would rather be gods of our own lives, we constantly push the blame on others whether it be the opposite sex, parents, teachers, or leaders.  We complain and test God, “If only…then I will…” even though He already created perfection in the Garden of Eden.  Adam and Eve are the perfect literary symbols or representatives of all humankind.  Yet we keep blaming them instead of accepting our own responsibility represented by them.

This is why John the Baptist preached to repent and Jesus reinforced it.  Doctor’s cannot prescribe the right treatment until the right diagnosis is made.  The same is true for our spiritual and emotional condition.  The problem is no one wants to accept responsibility.  Entitlement thinking blinds, hinders, and masks. It prevents from making any necessary changes.   It feeds a false sense of “deserve” based on pity or victim mentality.  Think about it.  If we’re all victims of Adam and Eve’s poor choice then the faulty thinking is justified.

So back to Small Foot and the lessons we can learn.  Did the humans apologize for what their ancestors did to the Yeti and commit that they would not let it happen again?  How did the Yeti come to forgive them for treating them this way? How did they find the strength and motivation to forgive?   More importantly will we evaluate our own family and political history?  How does Small Foot encourage you to do so?

This is what I love about a good story.  They trigger thought to inspire reflection, learning, and change for the better.  Enjoy the hilarious humor of Small Foot and take time to think and discuss its deeper matters.  Let’s not embrace any more intentional lies to deceitfully lead and guide others.  Let’s face the truth through love which forgives as it seeks justice and reparations.

by Hope Mucklow, author of Rojo The Baby Red Panda at the Zoo