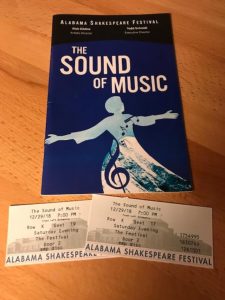 A gift I gave to my daughter and self was tickets to see the end of the year shows at Alabama Shakespeare Festival.  We were somewhat aware of the Sound of Music from watching the movie and listening to its accompanying sound track.  I had read the Gospel of Luke several times and was quite curious what the “show” would be like. 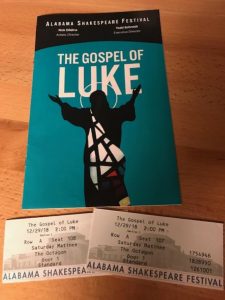 We attended the Wednesday matinee of the Sound of Music to see two of our friends acting in the cast as Von Trapp children.  The stage was curiously set with hills as the floor and  two fake grand pianos set back to back in the center.  The female adult cast opened the doors with angelic song and the story proceeded. Courtney Bassett, Maria, won our respect and hearts quickly, but I was still distracted by the setting and the two pianists.

Then Angela Dickson, Baroness Elberfeld, and Kevin Ligon, Max Detweiler,  portrayed the parts of two indifferent self serving people who topped it off singing No Way to Stop It.  I had no idea how different the Broadway Show was from the movie.  How Can Love Survive was another unfamiliar tune with thought provoking lyrics.  Enraptured by this shift of story line, I wanted to come see the show a second time.

This was easy to justify because one of the girls who acted as a fellow orphan with my daughter in ASF’s production of Annie this past summer was scheduled to perform in a different cast of Von Trapp children Saturday night.   I had already purchased our tickets to see the Saturday matinee of the Gospel of Luke, so sticking around for a second show would be possible.

ASF upgraded our seats to the front row for the Gospel of Luke.  We settled in.   My daughter and I briefly discussed that this show would be very different from the Sound of Music.  It was a one man show, with very few props, no fancy costumes, and no music.  Bruce Kuhn deliver just that.  But what surprised me was his first line was the beginning of the Gospel of John, not Luke.  Immediately, I regretted not bringing my Bible to follow along to see how the story differed.   My memory was all I had to rely on.  I was enthralled at the opportunity to hear the Gospel of Luke, John, or mix there of in similar manner to how it actually would have been told early on.

Most are unaware that original biblical scripts have no chapter or verse numbers marked much less any subtitles or headings.   They are also unaware of how story telling occurred and that this is how the history and teachings were passed on from one generation to the next.  Wow!  my daughter and I now propelled centuries back into what their world might have been like.

Unfortunately, we weren’t prepared to listen as intently as those back then would have.  It was tough to stay alert and listen closely, Mr. Kuhn did a great job trying to keep our attention, but I certainly appreciated a coffee and brief walk in the park at intermission.   I likened the experience somewhat to the best and longest sermon I ever heard preached . So, I came back for the second half much more in tune and ready to observe.

Prior to the evening shows at ASF we stood in the waiting area behind back stage to great my daughter’s friend and parents from Annie.   We were surprised when Mr. Kuhn came through the door and was happy to say, “Hello.”  I enjoyed such pleasant banter with this fine actor regarding the irony that this Gospel of Luke actually starts with the Gospel of John.

We proceeded to enjoy our second viewing of the Sound of Music much more as I had determined not to allow the hilly stage floor, fake grand pianos, and pianist distract me.  I wished that I could have watched the Gospel of Luke  a second time too, but I can’t.  What I can do though is sit down and read the entire Gospel of Luke in a single sitting.  And that’s exactly what we did the next day.

Some get hung up on “artist’s privilege” otherwise known as the changing of the original story line to make a show.   One reviewer of my book, Rojo, The Baby Red Panda at the Zoo, had issue that an Asian animal was speaking Spanish.

But art is what makes the world colorful and hopefully inspires us to learn more.  The Von Trapps were a real historical family and figure.  How true are either the silver screen or stage versions to their experience?  Even the book written about it will be slightly biased.  It’s just how it goes.   So, we can either get all excited about these varied perspectives in a negative combative manner or in one that inspires us to learn more from a different angle.   What will you choose?

*Just an interesting side note: We learned from visiting the Knoxville Zoo that there are fossil remains that have been uncovered nearby matching that of red pandas.  They could actually be American!