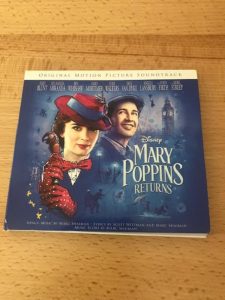 It took me a while to coordinate finding the time to get to the silver screen to see this latest masterpiece from Disney.  Usually, I wait until they appear in Redbox so that I can accommodate my personal schedule and enjoy the comfort of my home with some of my best company, my two large black dogs.  However, the significance of who Mary Poppins means to me personally, it was time to make an exception. 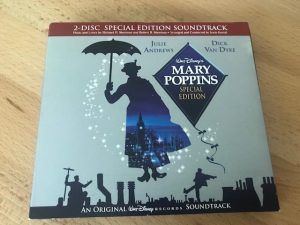 Actually it has been a combination of Disney’s original Mary Poppins movie, Julie Andrews, and the 1965 movie The Sound of Music that has contributed to the inspiration of my song writing and parenting style.

As well intended and loving as my mother was, she ruled our home by shame inducing lectures, yelling, and tirades.  Ironically, she is the one who also ensured I grew up watching these classic films as well.  Isn’t this so human of all of us?  We are all so full of contradictions.

When I finally became a mother myself at 39.5 years of age, I began to understand my mom much better.  Children usually do not listen the first time they are instructed, they pitch selfish fits, and demand literal justice for every little thing.  It can be quite draining and easier to yell than to take a deep breath as Julie Andrews and Emily Blunt model fantastically as Mary Poppins in both films.

I had been teaching 8th Grade Science in Montgomery County Public Schools for the year prior to the arrival of my precious bundle of joy.  Professional development and faculty meetings inspired me to manage my classes without resorting to yelling even though it was my default template when my patience had expired.  How could I pour such creative energy into children who weren’t mine and leave my own to suffer through my screaming even though her behavior most probably warranted it?  More importantly, I saw that it didn’t work for my daughter at all.  She was born resilient to it and would instead incite more of it.  Why?  because it’s all about power.  She discovered this gave her some ability to control or rather “push my buttons”.  Therefore I wrote my own tune to sing to calm both of us down.  Who needed the lyrics more?  Me or her?

What I found in Mary Poppins Returns was much more than just more fun catchy tunes that Julie Andrew had sung for over 50 years to me as I watched the original Disney classic.

Emily Blunt just like Julie Andrews portrayed the ever calm and highly needed Nanny for the Banks family.  Most families need an outsider to help with each family’s limitations passed down generation after generation empowered by life’s usual  pain filled struggles.

Julie Andrew’s Mary Poppins taught George Banks what was truly important and needed in his life.  He made the changes needed that he was convicted of and raised Jane and Michael much better after Mary Poppins left.  This is evident in the career choice Michael made.  He didn’t immediately follow into his father’s foot steps in the financial industry.  He pursued something very daring especially when one needs to pay the bills, the art world.  But when life’s hardships came as they do to each of us, Michael defaults back to his father’s model.

Over come with grief of his wife’s death and the responsibility to fill both parent’s roles in his three children’s lives, he had fallen prey to take out a bad loan that would be difficult to pay with his fluctuating income as an artist.  Unable to keep up with it and other financial responsibilities Michael’s faith begins to waiver.  Desperate times call for desperate measures so he secures a job as a bank teller.

Then the three banks children behave in just that manner.  Annable played by Pixie Davis,  mimics everything that mother taught and said.  Georgie, played by Joel Dawson, easily distracts and wanders off accordingly.  John, played by Nathanael Saleh along with the other two blame the others for all that is wrong, but seeks to try to save father and the home.

To complicate things further, the world is full of evil individuals who feed off of the vulnerability of others, especially the nice ones.   Colin Firth plays the typical menacing bully Wilkins at the bank.  He has no regard for others and views any of their hardships as an opportunity to feed his selfish narcissistic greed further.  He changes history to suit his own agenda, usurps the law to his advantage, gives lawyers a bad name, twist the truth, and calls those who bear it liars,

Therefore, Michael Banks played by Ben Whishaw is in desperate need of the Christ like figure in Mary Poppins to return in Emily Blunt.  His sister Jane, played by Emily Mortimer, and he struggle to believe what was once their childhood dream.  Through the tough love of Mary Poppins and good friendship in Jack played by Lin-Manual Miranda, neighbors and housekeeper, Ellen played by Julie Walters, Michael comes around to see the truth, embrace it, face it, and rediscover what is most important, love.

May we each in turn continue to grow up in similar manner.  First, let us accept help from the outside observer who see our families needs better than ourselves.  Then, honor our parents by accrediting them with it was the best that they knew.  Continue on to find inspiration in wonderful lyrics contained in each song in this soundtrack especially, “Don’t Judge a Book by its Cover.”  And put it all together as we take responsibility for our lives by maintaining order and taking time to read the whole book, fly kits and balloons with our children and/or loved ones.