Teachers, home school parents, and youth leaders are you looking for a great activity that boost reading comprehension and aligns with Endangered Species Day 2017?  Click RojoEndangeredSpeciesDay2015 to download a PDF file to print, copy, and use of all of the following.  In addition you will find a teacher’s note page and page 4 in Spanish.

Native plants or animals whose current population numbers are so low that the species faces the threat of extinction (no longer existing anywhere on Earth).   Various levels of this status start with least concerned (LC0, near threatened (NT), vulnerable (VU),endangered (EN), critically endangered (CR), extinct in the wild (EW), and extinct (EX).  Possible causes of this threat are loss of habitat, drought, climate change, competition for resources from invasive species, and poaching.

Certain species if not preyed upon or hunted will multiply to high numbers that will consume too many resources or develop diseases and other problems that will ultimately lead to death anyway.  Natural predators are nature’s way of keeping balance.

Poaching (sounds like coaching with a “p”) differs from hunting, because the hunter violates the governing laws that exist that determine what may be hunted and when.  These laws help keep the population numbers in balance allowing adequate time for reproduction and survival of the animal, while ensuring that human interest and safety are protected as well.

Too often these laws are broken, because humans create demand for animal parts and products, for various reasons.  For example, the red panda’s adorable striped tail is still used in the Yunnan province of China.  Here it is used to create hats worn by newlyweds who consider the tail to be a lucky charm and the perfect gift for a new bride.  Therefore, red panda fur “pelts”continue to be illegally sold on the black market.

Habitat loss due to deforestation explains one of the reasons why both the giant panda and red panda are endangered species.  Both pandas rely mainly on bamboo for their #1 food source.  Recent research finds that based on the structure of their skulls, the two species are unable to eat the same thing.  Because they eat different parts of the bamboo, the red panda and giant panda coexist without problem.

The good news is, if people work together, some species on the endangered list can rebound in population to the point where they’re numbers are no longer considered to be endangered.  This is the story of The American Bald Eagle.

Learning about, teaching others, preserving habitat, conserving water, and adopting a species through a conservation program like The Red Panda Network are effective ways to make a positive difference.  Special days like Endangered Species Day” are designated to increase awareness and understanding of how humans can better care for their shared environment with a multitude of different species. 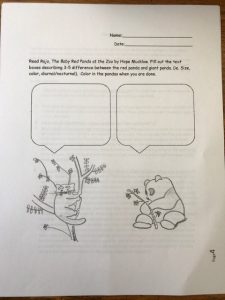 3. Visit https://www.thoughtco.com/what-are-endangered-species-129927 to learn more about the US Endangered Species Act and to view the types of animals listed.

4. If you are interested in adopting a red panda as a class or as an individual, do so through the https://redpandanetwork.org/